As my senior year comes to a close and graduation draws nearer and nearer, I’ve been reflecting a lot recently on the things that I have done over the past 4 years at Elon. While at Elon, I’ve accomplished things and gone places that my high school self would have never imagined. I’ve (almost) successfully completed student teaching, I’ve studied abroad not once but twice, I was awarded a research grant that allowed me to create and co-host the first ever Elon English Language Teaching Symposium, and I’ve met friends and professors who have encouraged me and mentored me through every step of the way. Thus, I’ve decided that I want to start writing again, particularly about things that I have experienced in the past 4 years, in order to process and to share.

A family member recently asked me if I will be scared to leave for a whole year in August when my Fulbright grant in the Czech Republic begins. I thought about it for a second. While I know that there will be moments of homesickness, of loneliness, or uncertainty, I would not say that I am afraid. The thing that I fear the most is missing out on opportunities because the fear of discomfort stopped me from taking a chance.

When I think about the moments that have stretched me, that have pushed me, and that have changed me, I realize that they all involve moments of discomfort or moments of challenge. Living in Ecuador during the summer of 2018 constantly pushed me out of my comfort zone. Each moment, big or small, held a sense of adventure and was so different from my previous experiences abroad. From learning to communicate in Spanish, to teaching at a summer camp, to constantly adjusting to the culture of always being late, I am proud to say that my time in Ecuador made me more flexible, more adaptable, and more considerate of others.

By the end of the trip, I could see the change in myself. I was more confident and had a newfound ability to take things in stride. I had gotten over food poisoning (twice!), taught students ages 5-15 and grappled with the language barrier, spent 8 weeks with no data plan, walked a mile just to print out my teaching materials for the week, and had trained myself to throw all toilet paper into the trash can. I felt like I could do anything. Which is why, on the End of Service trip, I decided to say yes to spending a day with strangers (sorry, Mom!). 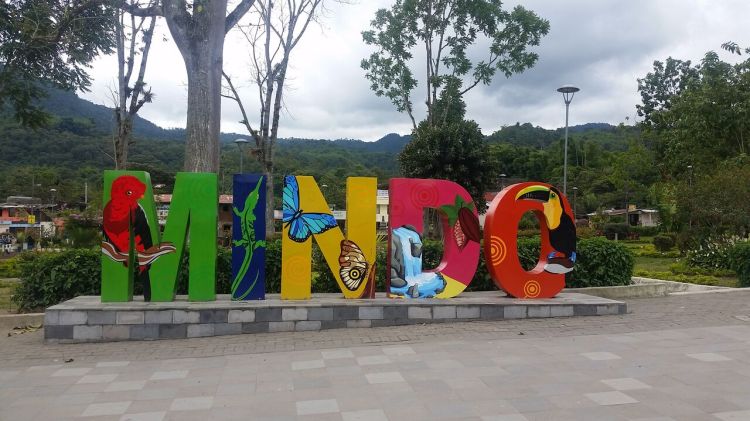 One of our final destinations as a WorldTeach volunteer cohort was the city of Mindo, Ecuador. Mindo is located to the north west of Quito in the Andes mountains and has a population of around 3,000 people. It is also a cloud forest, one of the rarest types of climates in the world, in which the rainfall is heavy and condenses and floats near the trees because of currents and the mountains. In other words, the city of Mindo is a small jungle paradise with amazing biodiversity around the corner at every turn. 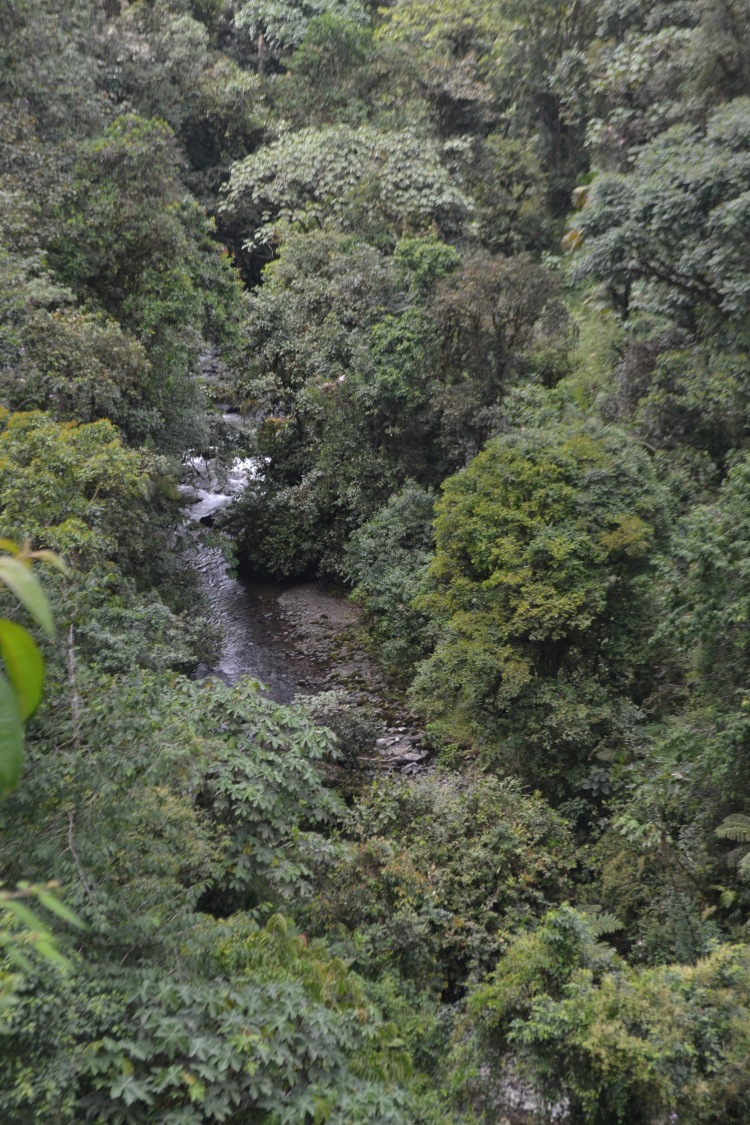 On our first full day in Mindo, the other volunteers and I took the plunge into the cold Mindo river for a tubing expedition. When I hear tubing, I think of lazy rivers and pulling a cooler float alongside. We were in for a shock when we found out that we’d have a guide with us on our tubing adventure. Think white water rafting, but in connected tubes. We bumped our way down the rocky river, getting splashed with freezing cold water and laughing at the unexpected fear of being catapulted down the river backwards. 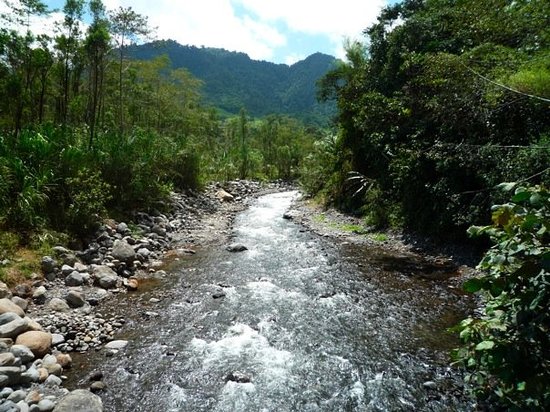 When we got out, the drivers of the tubing company took some photos of our group, and through asking them to share the photos, we ended up becoming friends and meeting for drinks that night. We salsa danced, learned more about the town of Mindo, and I got a chance to practice my beginner Spanish. They invited us out the next day to show us around town and on a whim, we said yes. I should preface this story by explaining that Mindo is extremely safe, and was definitely the safest place that I visited in Ecuador. It is a small community where everyone knows each other and people walk around the streets chatting and visiting. Even at night, we were able to walk around comfortably (which we did not do in Quito or in other towns like Riobamba where I lived).

Our new friends picked us up in their white pickup truck, and we soon learned that they used the truck for a taxi service around Mindo, especially around tourist seasons. I found it humorous that the truck had no “taxi” label at all. The driver simply stuck a white piece of computer paper in the windshield that read “taxi” when it was in service. (This should give you an idea of how small the town was). Luckily, my friend Emma spoke better Spanish than I do, so she helped to translate our conversations when necessary. Our new friends asked us if they could take us to one of their favorite local spots, a nearby waterfall called the Cascada Del Amor. We stopped on the way there at one of their favorite local cheese shops, and when we arrived at the waterfall, we were the only ones there. It was a short rocky hike to the waterfall’s opening – a crisp clear round blue pool with a medium sized waterfall as the backdrop. We stripped to our swimwear and dove straight in. I’ve loved the water since I was a little girl, and I wasted no time paddling to the waterfall side of the pool and climbing up the rocks to sit in the stream.

There’s something so wonderful about discovering a new place when there are no tourists there. As I spoke with our new friends in choppy Spanish, I felt strangely at home as we swam and learned about each other’s lives.

After our swim, our new friends explained that on the other side of the river, there was a resort where one of their friends worked as a server. They explained that if we wanted, we could go check it out and have a snack and dance some before heading back home. When we drove to the resort, I began to grow a bit alarmed. We were winding down dirt roads in the middle of the cloud forest. If I thought Mindo was a small town, this was even smaller. There were no signs of civilization in the area and we had been driving further away from the main road for about 10 minutes. Emma and I whispered to each other in English. Maybe we should just ask them to go home? Finally, we pulled up at a huge all-white building with a circular blue dome roof. I breathed a sigh of relief and we entered the main gate of the premises.

The owner of the resort later explained to us that they only recently opened with the goal of attracting more tourists to this remote area of the country. The resort has a pool, a hot tub, a sauna, a dance floor, and many of the modern amenities that you would find in a hotel in the United States (which was not the case at the hostels we stayed at!). It was a memorable night spent swimming and dancing with other hotel guests and learning about the struggles to find work that many locals find in the area, especially during the seasons that are not tourist peaks. For example, our friend the taxi-driver has to leave his home and go to Quito for several months of each year to make money to send back to his family. Saying yes throughout my time in Ecuador allowed me to make new friends, see new places, and learn much more of the language and culture. After all, the other volunteers I traveled with also began as strangers! 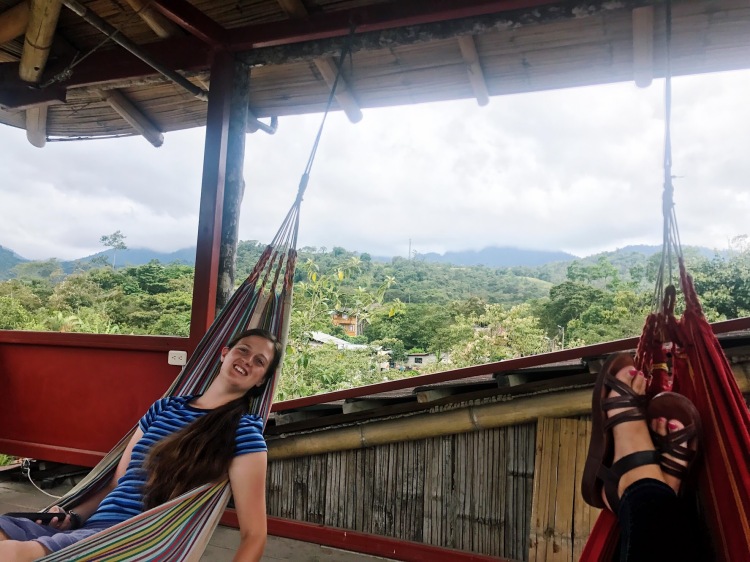 Break outside the norm

At home, we tend to get stuck in our groups and our experiences without taking a chance. Comfort can encourage us to stick to the same routine. However, I believe that adventure can be found in little ways like trying a new restaurant, visiting a place in your own city that you’ve always wanted to go, or making a new friend and letting them teach you something. While you should always follow your gut instinct and learn strategies to stay safe in any country or area you are in, it is also important to not let the fear of trying something new stop you from making a friend, taking a new job, or spending time doing something that you’re passionate about.